Leisure Heating branded goods are made or assembled in Great Britain.

We deliver excellent solutions and value to our customers. 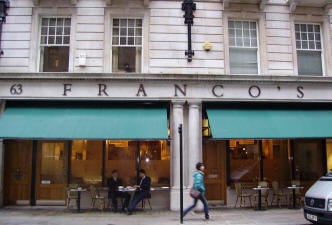 Franco’s restaurant and bar lies in the prime location of Jermyn Street in London’s SW1 district, now re-styled and refitted to suit the modern city dweller

Franco’s has a large pavement area with covered seating to accommodate people who want to eat or drink outside. Apart from the summer months these areas were rarely used because of the cool weather conditions and, as a consequence, passing trade was being lost.

By installing a series of 3kW Linquartz infra-red heaters, specified and supplied by Leisure Heating Ltd, the pavement area can now be used to accommodate customers all year round.

The use of energy efficient Infra-red heating has allowed Franco’s to increase their business in an area that would normally remain empty for most of the year. Heating outdoor areas means that existing facilities can be maximised and profits boosted. In addition, the new smoking laws that come into place in June 2007 mean that smoking will not be permitted in indoor areas. The new heated area in front of Franco’s already caters for those customers who wish to smoke when the smoking ban comes into force.

Infra-red heating is based on the transfer of thermal energy by electromagnetic radiation. Infra-red emitters are classified according to the temperature dependent peak wavelength which they emit and can be short-wave, medium-wave and long-wave.
Short-wave infra-red heaters have the ability to heat people directly without having to heat up the air first. They are compact, energy efficient and easily installed.

The element used has a thermal response similar to an electric light bulb so is instant. Infra-red heaters can be easily used with PIR movement detectors or with power controllers.

Leisure Heating Help Alan Titchmarsh And His Team With An Episode Of 'love Your Garden' The Challenge In March 2018, Leisure Heating was approached by the production team of Alan...
Read More